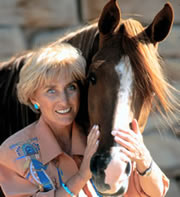 The pioneering work of Linda Tellington-Jones, PhD (Hon) has its roots in a philosophy that sees all beings – humans and animals alike – as reflections of a Divine Whole. The Tellington TTouch® Method was first created four decades ago as a system of animal training, healing and communication that allows people to relate to animals in a deeper, more compassionate way -- a way that furthers inter-species connection and honors the body, mind and spirit of both animals and their people. The Tellington Method utilizes a variety of techniques of touch, movement and body language to affect behavior, performance, and health, and to increase an animal’s willingness and ability to learn in a painless and anxiety-free environment. Linda’s highly effective and revolutionary approach to working with animals brought her world-wide recognition. The method for horses, first developed in the 1970’s, was known as TTEAM® (Tellington TTouch® Equine Awareness Method). 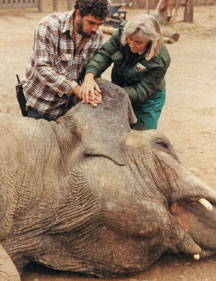 The work is now named Tellington TTouch® Training because Linda broadened the method to include the world of companion animals, developing techniques that deepen mutual trust and understanding and strengthen the human/animal bond. The Tellington Method was also introduced as an effective and valuable method to reduce stress in wildlife rehabilitation and to enhance the well-being of animals in zoos.
As an internationally acclaimed authority on animal behavior, training and healing, Linda has given presentations and demonstrations the Tellington Method at veterinary conferences, universities, equestrian expositions, North American Handicapped Riding Association and the Delta Society world conferences, therapeutic riding associations, Olympic training centers, wildlife rehabilitation conferences, and zoos throughout the world. 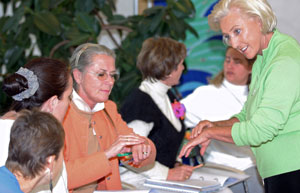 Linda has also brought TTouch® into the world of humans, teaching week-end and week-long workshops, for more than 35 years, in programs for individuals and their family members, as well as for health-care professionals. TTouch® for You has emerged as an important addition to the increasingly respected world of alternative healing practices. Linda is a visiting faculty member at the University of Minnesota where she has co-taught Tellington TTouch® for humans annually since 2002. At this time Tellington TTouch® was included in the research program at the University of Minnesota’s Center for Spirituality and Healing. The results of studies on humans by Cecilia Wendler, PhD, RN, CCRN have been published in three prestigious professional nursing journals and the Journal of Applied Animal Welfare Science. 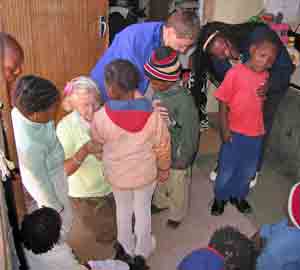 Through her non-profit organization, Animal Ambassadors International®, Linda supports projects of children working with animals and learning it for themselves in order to enhance understanding, compassion and quality of life for both humans and animals.

Awards include:
2019 Recipient of the Torch-Bearer Award for Peace for Linda's lifelong devotion to the development of a heart-based method that nurtures a unique, peaceful connection between animals and people. She joins millions around the world who are dedicated to Sri Chinmoy’s Ever-Blossoming Dream of global oneness and peace within. 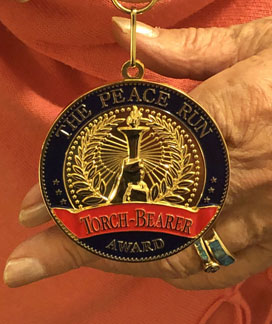 Publications
Linda has written 23 books about TTouch which have been printed in fifteen languages. Her most recent is Training & Retraining Horses the Tellington Way - Starting Right or Starting Over with Enlightened Methods and Hands-On Techniques.  Linda Tellington Jones with Mandy Pretty.

Vision and Outreach: Linda’s passion is for spreading her message of understanding and compassion for animals and their people through her books, videos and certified TTouch® teachers in 36 countries.

Linda's videos and books, in English (available in our online store) include: